When Insurers Cause as much Damage as Catastrophes 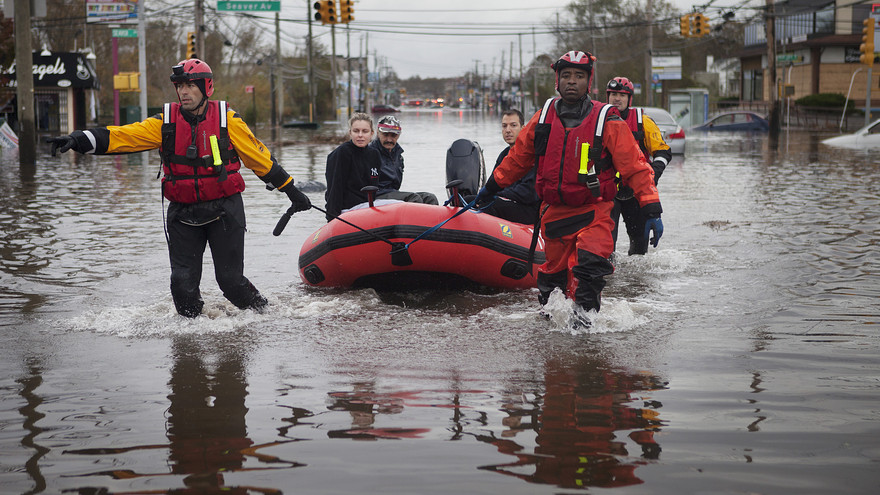 Victor J. Blue, Bloomberg News.
The aftermath of a major storm can be just as frightening for people who have difficulty getting adequate payouts from insurers.

Someone should invent insurance for homeowners insurance.

Just ask the thousands of Hurricane Sandy victims, who over the past 2 1/2 years have filed lawsuits, saying they were shortchanged by their insurance carriers. They are people like Charles and Beverly Mooney, whose summer home in Toms River, N.J., was damaged by the storm. The couple has reportedly sued Selective Insurance for about $7,000 in claims.

The Mooneys’ lawsuit to recover sales tax included in their repair bills, which they allege was omitted from their payout, is one of thousands filed against insurance companies, assessors, adjusters and engineering companies in connection with the October 2012 storm. The litigation also helped prompt a Federal Emergency Management Agency decision recently to reconsider almost 150,000 claims made under its flood-insurance program.

Regardless of the outcome of the FEMA review, it seems clear that Hurricane Sandy victims were hit with a one-two punch: First the storm damaged them; then they faced a personal financial crisis.

I’ve seen the escalating desperation in mortgage applications after major natural disasters, including wildfires on the West Coast, river floods and fires in Colorado and tornados in the heartland, as well as Sandy and other East Coast hurricanes and tropical storms. Then there are man-made disasters, such as fires and gas explosions, in which homeowners are innocent victims.

The first blow is an unavoidable weather catastrophe, which most homeowners think they have prepared for by purchasing property insurance, which is required under most home-loan agreements, and a supplemental federal flood insurance policy, which is required by lenders if borrowers live in a FEMA-determined flood-hazard area. At first, the victims mourn the loss of photos and wedding dresses and other the things that cannot be replaced.

The second blow, however, seems unusually unfair, as insurance is often a disappointing product, even when there is no malfeasance. When the payout finally arrives, it’s reduced by deductibles and sometimes depreciation. Anything outside of the home, such as fences, walls and trees that were washed away, may not be covered either.

Future insurance policy rates will likely be higher as well. I’ve seen homeowners refinance just so they can handle the higher insurance bill that comes after flood maps are redrawn.

What’s even worse is that all this chiseling can lead to financial ruin for some homeowners. This is where hard-working people who have done nothing more than reach for the American Dream can have it knocked out of their hands. First, homeowners deplete savings or emergency funds; then they max out credit cards or fall behind in payments to keep contractors on the job; then, perhaps, they sell a second car or pull the kids out of private school. Maybe they even borrow from family and friends, often straining personal relationships at a time when they are needed the most.

Some people simply abandon their homes and try to start over.

One refinancing applicant, the owner of a Long Beach, N.Y., home that Sandy flooded with several feet of seawater, told me she felt as though she had been stuck in a financial Vietnam, a quagmire. She said her insurer paid about half of what it cost to make the home habitable again. Her repair work also took more than a year, which is not uncommon. Imagine how hard it is to find available labor and building materials after a major storm. (If you live in South Florida, trust me, there will always be post-hurricane shortages of terra cotta tiles delaying roofing work for months. And have I mentioned mold yet? Or insurers that go bankrupt?)

During that time, some homeowners find themselves paying both rent and a mortgage.

Eventually, the homeowner in Long Beach, who suffered further when her contractor accidentally punctured a steam pipe that re-flooded her property, was able repair the house, pay her contractor and clean up her credit record. But it took a very stressful year, including a job transition. She said she felt fortunate because she didn’t also have to contend with any sudden health issues.

Nearly three years later, she is looking to refinance to get her personal balance sheet back in order. Homeowners hit by a disaster should keep in mind that they are lucky in that building equity in a home gives them the wherewithal to stage a personal rebound after the American Dream turns into an American nightmare.

We worked with a single mother whose house was hit by a fire. She was earning $30,000 a year, so replacing all that was not covered by insurance was nearly impossible, and she spiraled into debt. Refinancing took a long time, including getting her into a new insurance policy to get her debt ratios in line. She finally was able to refinance all of her debt into her lower-rate mortgage and move on with her life. Not everyone is so lucky.

Sure, those of us in the lending industry probably have a reputation as cold-hearted tightwads focused only on hard numbers. But let me tell you that it’s painful, in a personal sense, to read a file or listen in an interview how someone struggled with almost going under after a storm struck.

There are probably dozens of small and invisible ways the American Dream can wash away from someone, including the loss of a job or illness. But when it happens to people who have paid their insurance premiums in good faith, it’s impossible not to see and feel that something more should be done to help these people rebuild their homes and their lives.